The BioSc funded project PhytaPhoS focused on optimizing the sugar beet production process by addition of phytases. The thereby obtained phytate reduced sugar beet slices and a phosphate enriched spent lime are highly interesting for the farmers as well as the breeders.

At first in WP1 the identification of phytases which are active in the sugar beet matrix was tackled. The E. coli phytase has been selected for the follow up mutagenesis and was produced to supply enough material to the partners. Subsequently, enzyme engineering approaches were performed. Though directed evolution, signal peptide investigations and recombination libraries, phytase variants with improved thermal resistance, increased expression and active in sugar beet extract were identified. In addition, phytase immobilization on a support and first separation from the media were demonstrated which allow the efficient application of the phytase in the sugar beet production process.

In WP2 P-enriched spent lime was produced. Dicalciumphosphat (CaHPO4) was found to be the main phosphate fraction in spent limes. This form of P is nearly insoluble in water. The availability for plants was tested in WP3. Laboratory tests showed that the proportion of phosphate dissolved with sugar extraction was much higher than data from the literature suggest. On the other hand, the remaining P-residue in the extracted sugar beet pulp and above all the phytin P fraction was significantly lower than described in the literature. The yield of additional P after treatment of sugar beet pulp with phytase enzymes was therefore much lower than expected. It is possible that the phytase content of modern sugar beet varieties has declined significantly over the last decades due to breeding measures. In order to verify this, old varieties would have to be analyzed. However, these are no longer cultivated today.

In WP4, both, a private cost-benefit analysis (CBA) with reference to an average sugar factory, as well as a social CBA witch analysis of the impacts to society added to the private effects, had been prepared. Based on the data available in the literature on the phytin content in sugar beet, both calculations showed highly-lucrative results. Based on the phytin content in sugar beet determined in WP2, the private CBA shows hardly any positive effect, but the social CBA does. To protect the environment, the use of enzymes in sugar production would be worthwhile in any case. 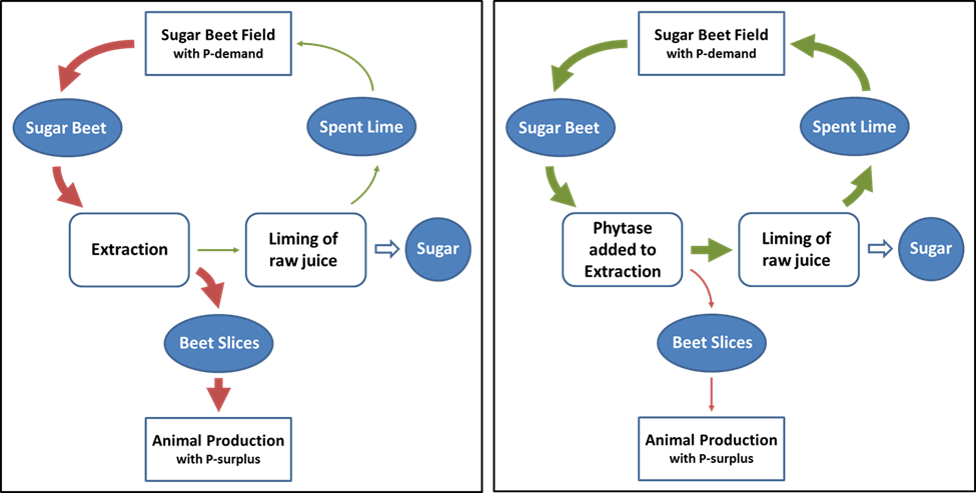 Closing nutrient cycles in sugar production. Flow of phosphorus without (left) and with use of a thermally stable phytase (right).

Funding budget
The total budget of PhytaPhoS is € 675.160. PhytaPhoS is part of the NRW-Strategieprojekt BioSC and thus funded by the Ministry of Innovation, Science and Research of the German State of North Rhine-Westphalia.