Saffron is one of the most expensive spices on earth. Currently, its production requires manual harvesting of anthers and stigma of the crocus flower (Crocus sativus), and on average, 150,000 plants are required to yield 1 kg of the raw spice. The first committed step in the biosynthesis of Saffron constituents is cleavage of the ubiquitous carotenoid zeaxanthin at the 7,8 (7’,8’) positions to yield crocetin dialdehyde and two molecules of 3-HO-β-cyclocitral.

Carotenoid cleavage dioxygenase 2 (CCD2) has recently been established as the responsible enzyme catalyzing this cleavage. This finding, in turn, paves the way towards synthetic- biological routes of Saffron production. In this Seed Fund project, we aimed to accomplish the initial steps towards such routes by identification of novel ccd2-type genes, establishment of in vivo and in vitro assay systems for CCD2-mediated zeaxanthin cleavage, and engineering of a selected CCD2 enzyme by directed evolution.

The CG Usadel extracted RNA from 5 different Crocus species. Four of them could be used to sequence and generate transcriptome assemblies. Two of those assemblies yielded full length ccd2 coding sequences. These sequences were corrected using targeted cloning and Sanger sequencing, and turned out to be identical. Furthermore, a shorter potential splicing variant of this gene could be identified in two of the transcriptomes. By heterologous gene expression in the bacterium Pseudomonas putida, the CG Jaeger/Drepper could show, for the first time, in vivo biosynthesis and CCD2-mediated two-step cleavage of zeaxanthin to yield crocetin dialdehyde via 3-OH-β-apo-8‘-carotenal. Moreover, it was demonstrated that this product is further processed by dehydrogenation to yield crocetin, the following biosynthetic intermediate in saffron synthesis, by the intrinsic P. putida enzymatic machinery. The CG Schwaneberg established an in vitro conversion, analysis and screening system for CCD2-mediated zeaxanthin cleavage. The protocol was employed to compare production and activity of in total eight different CCD2 constructs and one aldehyde dehydrogenase specific for the follow-up reaction, which is the cofactor-dependent oxidation of crocetin dialdehyde to crocetin. CCD2 constructs were found to be catalytically active, and up to 30% conversion of zeaxanthin to crocetin dialdehyde was achieved, which is more than six times of what has been reported in literature. Both newly identified CCD2s were active in vitro. Likewise, the tested aldehyde dehydrogenase was catalytically active, converting crocetin dialdehyde to crocetin with total conversions >60%.

In summary, the Seed Fund project “BioSAF” yielded two newly identified ccd2-type genes, whose gene products were shown to be catalytically active. A multitude of new protocols for CCD2 production, activity assaying and analysis were developed, which further led to the generation of a plethora of data and new insights. All project partners will continue their fruitful collaboration to establish biosynthetic production routes towards Saffron. 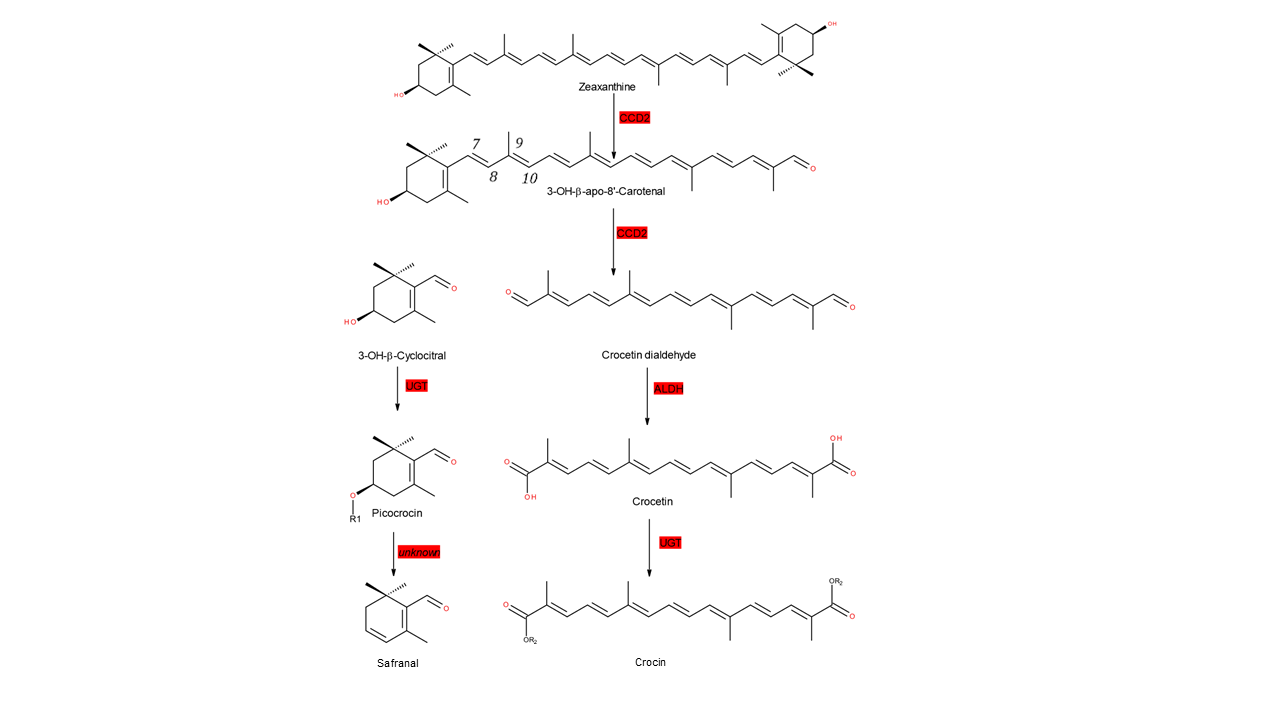 Funding
The total budget of BioSAF is € 149.993. BioSAF is part of the NRW-Strategieprojekt BioSC and thus funded by the Ministry of Innovation, Science and Research of the German State of North Rhine-Westphalia.