Metabolic evolution of microorganisms for the efficient utilization of carbon sources

Corynebacterium glutamicum is one of the most important industrial microorganisms. Annually, more than 5 Mio. tons of amino acids are produced by C. glutamicum for the food and feed industry. Additionally, the organism is used for the production of different fine chemicals and pharmaceuticals. These production processes are usually based on 1st generation feedstocks like glucose from corn, barley or sugar cane. In favor of a sustainable bioeconomy it is reasonable to look for alternative feedstocks not produced from food sources. One of these feedstocks is methanol which can be produced via synthesis gas from sludge, charcoal or wood residuals. Originally, C. glutamicum was not able to use methanol as a feedstock for the formation of biomass or a target product. However, the Institute for Bio- and Geosciences at the Forschungszentrum Jülich (FZJ) was able to construct a C. glutamicum strain by genetic engineering which can integrate methanol into its metabolism. The only drawback was that the strain could not use methanol as its sole feedstock. Since the approaches for further rational engineering were exhausted at that time point, the joint project “MetEvo” was created. In this project, the Chair for Biochemical Engineering at RWTH Aachen (RWTH) used the C. glutamicum strain from the FZJ for laboratory evolution experiments. These experiments were conducted in a special cultivation device suitable for continuous cultivation at mL scale. In this device, the strain was cultivated for several weeks at a time. Evolutionary pressure was applied by using medium containing methanol. Due to the relatively short doubling times of bacteria, dozens or even hundreds of bacterial generations are passed in experiments lasting for weeks. With every doubling of the bacteria, the genome also has to be doubled which opens the possibility for the occurrence of mutations beneficial for a higher methanol consumption. From each evolution experiment, samples containing evolved cells were transferred from the RWTH to the FZJ and screened for a higher methanol consumption. Strains with a higher methanol consumption compared with the initial strain were indeed isolated. The genomes of some of these strains will be sequenced to identify the underlying mutations. With this knowledge, the strains might be further improved by genetic engineering of, as well as, by conducting evolution experiments with the already evolved strains. 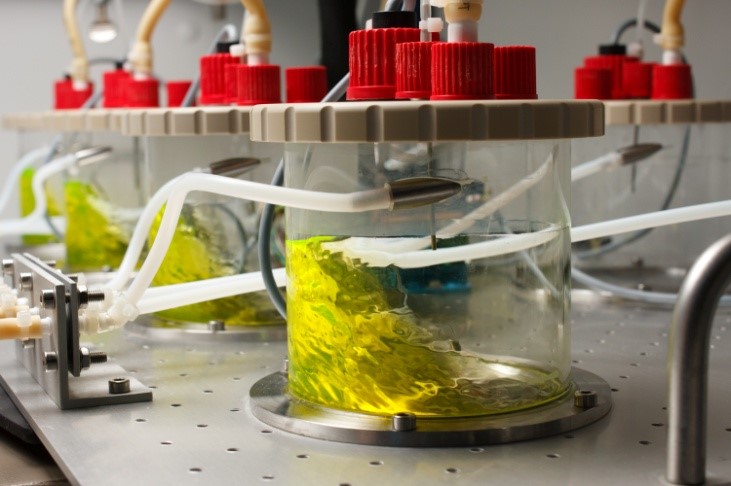 Funding
The total budget of MetEvo is € 131.459. MetEvo is part of the NRW-Strategieprojekt BioSC and thus funded by the Ministry of Innovation, Science and Research of the German State of North Rhine-Westphalia.